In a surprise announcement today, despite initially announcing they had withdrew from the forthcoming Junior Eurovision contest, it has been confirmed today that Ukraine will in fact be competing in Minsk, Belarus, taking the total number of competing nations up to twenty. Despite funding being cited as an reason for the countries withdrawal before, UA:PBC today released a statement stating that despite funds being limited to compete that they "it had a duty to make every eff

Ukraine's 2006 Eurovision Song Contest singer, Tina Karol, has hit out at her fellow Eurovision singer Alekseev, who represented Belarus at Eurovision 2018. Speaking to Komsomolskaya Pravda, a Russian tabloid newspaper, Tina Karol said of Alekseev that:"Eurovision singers should represent their home country and that Belarus already has enough singers to be able to choose one of their own". She also went on to say that “Belarus should be represented by an artist who holds a Be

The deadline for entries for the Junior Eurovision Song Contest 2018 has recently passed, and today it has been announced that Ukraine have withdrawn from the contest and will not compete in the 2018 edition. Ukraine, who have been ever present in the Junior contest since their debut back in 2006, announced they are withdrawing from competing in neighbouring Belarus this forthcoming November, due to their broadcaster UA:PBC citing financial difficulties as the reason for thei

This year 43 countries will be present at this years Eurovision Song Contest to be held in Lisbon in May. With around two weeks to go until all of Europe descends on Portugal's capital. Eurovoxx will introduce you to each country that will be participating. Who Is He? Kostyantyn Mykolayovych Bocharov , best known as Mélovin, is a Ukrainian singer and songwriter. At a young age he started to perform at concerts in his school. Later he attended and graduated from music and the

Ukraninan popstar MÉLOVIN today his entry for the upcoming Ukraninan national selection Vidbir, titled "Under The Ladder" the 20 year-old competed in the 2017 edition and placed 3rd with the song "Wonder" MELOVIN, real name Konstantin Bocharov made a name for himself in the country when he entered and won the sixth edition of the The X Factor in Ukraine back in 2016 when he was only 18, shortly after he released his first single "Not Alone" Shortly after he entered Vidbir 201

It's been almost two months since Portugal was crowned the winner of the 62nd Eurovision Song Contest in Kyiv, Ukraine and many Euro-Fans are still craving for more Eurovision. To quell our need for more Eurovision, we set out to find singers from all over Europe and Australia and compile them into a wish-list for the Eurovision Song Contest. Over this six part series we will travel from Norway to Australia, from Iceland to Portugal and from Finland to Italy in search of ou 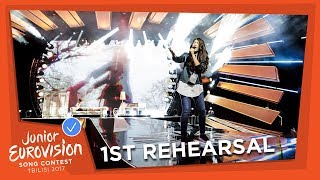 The last 4 countries of Junior Eurovision 2017 are getting ready to take to the stage for their first rehearsal. So let's see how they did. Polina Bogusevich from Russia was first up this afternoon and she definitely gave it her all! Polina seems to have re-created a house on stage with her, complete with dancers too, just like her music video. Polina has very impressive vocals and gave a very powerful and emotional performance of her song. Up next are Irina and Jana from Ser

Ukrainian Broadcaster NTU have revealed the 10 finalists that will take part in the national final on August 25th. A total of 27 acts performed in Ukraine's capital, Kiev, in front of a professional jury who then selected 10 finalists to take part in the national final. The members of the jury were: Rozhden; Sofia Rol (Junior Eurovision participant 2016); Svitlana Tarabarova; Valentyn Koval and Viktor Knysh. The 10 finalists: 1. Anastasiya Baginska – “Do not stop” 2. Darina H 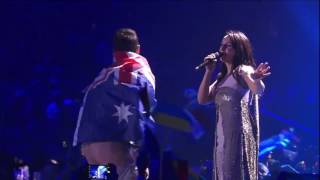 The first semi-final of Eurovision 2017 has just finished, and what a show it was! Ukraine has shown that they can really put on a show (although we all knew that from when the hosted Eurovision back in 2005). The show began with a performance of "Spinning" by Ukrainian singer and Dancer, Monatik, which led to the introduction of the 3 hosts for Eurovision 2017: Oleksandr Skichko, Volodymyr Ostapchuk and Timur Miroshnychenko, who previously hosted Junior Eurovision 2013 along
12
3
4