Australia becomes the latest country to withdraw from the Junior Eurovision 2020 contest following COVID-19 travel restrictions. It is the first time Australia is not participating in the competition since its debut in 2015. This move by Australia follows that of Wales, who officially confirmed their withdrawal from the contest yesterday. Currently, 13 countries are confirmed for the contest, which will be held in Warsaw, Poland on 29th November. The 13 confirmed countries a

Iceland | Australia agrees Iceland will host Eurovision if they win

Since Australia joined the competition, the EBU made one condition clear: If Australia wins, the festival must be held in a European country. From that moment on, there were doubts as to which country would do it and many people dared to place their bets. Now, Australia has dispelled those doubts, announcing who would organize the contest the following year in the event that they win Eurovision in a future: Iceland. According to the Icelandic newspaper Viðskiptablaðið, Icelan

Montaigne will represent Australia at the Eurovision Song Contest in Rotterdam with the song "Don´t Break Me" following her win at Australia Decides! The 24 year old Sydney-based artist placed ahead of nine other hopefuls, topping the jury vote with 54 points and coming second in the public vote with 53 points, for a total of 107. Televote favourite Casey Donovan came to a close second finishing with 100 points in total. "Don´t Break Me" is a powerful art-pop anthem that Mont 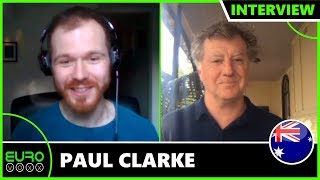 We recently caught up with Paul Clarke, former Head of Delegation for Australia, who is now the Creative Director for Australia Decides 2020. Paul Clarke is not only a former Head of Delegation and creative director, he is also a former musician, who "knows his way around a recording studio reasonably well". He does quite a bit of time in the studio, and can help in recordings with some of the people that need it. Speaking of Australia Decides 2020, Paul mentions that: “We’ve

Australian broadcaster SBS have announced two more artists that are going to try and get the ticket to the Eurovision Song Contest 2020. The art-pop artist Montaigne and alternative artist Didirri are the ones that are going to compete in Australia Decides 2020. That means they have announced six entries so far, and have four more to go before they are set for the final on 8th February. Montaigne is 24 years old and has become a huge name in Australia for her indie music. She

So, SBS have announced the next two entries in the final of Australia Decides. Mitch Tambo and IOTA have been selected to compete with hope to represent Australia in Eurovision Song Contest next year. Mitch Tambo is known from his appearance in Australia's Got Talent, he only lasted one week, but is now signed with Sony Music Entertainment Australia. His music is known for combining traditional sounds with contemporary beats. “I’m thrilled to be part of Eurovision Australia D

Eurovision 2020 l Two finalists have been announced for Australia Decides

Australian broadcaster SBS have announced their first two finalists for Australia Decides. Casey Donovan and Vanessa Amorosi will compete in the country's National Final on February 8th, 2020. They will be vying for the opportunity to represent Australia next year at the Eurovision Song Contest in Rotterdam, Netherlands. Casey Donovan is an Australian singer, songwriter, actress and author. She is best known for winning the second season of Australian Idol in 2004. At the age

Australia created their first national selection last year called "Australia Decides". Most of it was because how big the interest had got for the Eurovision Song Contest since they started to participate in 2015. SBS announced their participaction for Eurovision Song Contest 2020 on May 28th 2019. Later, on August 29th, they announced that Australia Decides is coming back to the Gold Cost for another year. SBS is going to collaborate with the broadcaster Blink TV to make thi

Last month Australian broadcaster SBS announced the return of the National final Australia decides.In a press release made by SBS, it was announced song submissions are open until Monday the 30th of September at 23:59 pm. You can be part of the selection process by submitting your entry at sbs.com.au/eurovision. John Marin, the commissioning editor of enterprise at SBS has said: “We have some exciting and surprising artists waiting in the wings, ready for the right song and t

The Australian broadcaster ABC have announced that 14 year old Jordan Anthony will represent Australia in the upcoming Junior Eurovision Song Contest 2019 in Poland. Jordan, from Perth, Western Australia, grew up in a musical family and has been singing and performing from a young age, even writing his first song when he was 7 years old. Earlier this year, Jordan auditioned for The Voice Australia, where he received a lot of praise from the judges. He made it all the way to t
1
234