The Junior Eurovision Song Contest 2019 which will take place in the polish City Gliwice on the 24th of November is getting closer, and therefore, more details of the Event are being announced. Besides the entries of the 19 participating countries of this year's edition, the composer of the theme song has just been announced as former Eurovision participant Gromee (Poland 2018). Even though he failed to qualify for the final alongside Lukas Meijer in Lisbon with his song "Lig

Another day has passed, which has seen another country select its artist for the up and coming Junior Eurovision Song Contest to be held in Gliwice this November. Today's news comes from Italy who have selected the young singer Marta Viola to be the countries representative at the contest. Once again, the national broadcaster for Italy, RAI have opted to go internal, and have selected Marta Viola with the song, "La Voce Della Terra" (The Voice Of The Earth). The song, and m

The Belorussian broadcaster BTRC have submitted their plans for Liza's performance at Junior Eurovision in Gliwice. Alongside the submission, the broadcaster have also confirmed that minor changes have been made to both the song and the choreography. A video clip that has been recorded by the Belorussian broadcaster in Minsk, that shows desired camera angles, among other things, will be used by the directors of Junior Eurovision prior to the contest. Check out Jess' reaction

Television broadcaster TVE have announced that Blas Cantó, was one of six shortlisted singers to represent Spain at Eurovision 2020. Head of Entertainment for TVE, Toñi Prieto, explained at a press conference yesterday that the broadcaster had contacted various record labels to find potential singers for Eurovision. Speaking on why Blas was chosen for Eurovision, Toñi said: "Because he is a young, versatile boy with a good voice and can sing a song of a style that fits. He i

Junior Eurovision 2019 | Ukraine releases it's official video for, 'The Spirit Of Music&#39

This year's Junior Eurovision Song Contest will be held in Gliwice, Poland. With less than two months until the final, many countries are in full swing with their preparations for the competition. Ukraine is just one of them who have filmed their official music video. In the last week, five countries have released these official video's, with today seeing Russia, and Ukraine producing these. Sophia Ivanko won the right to represent her home nation, and today has seen the o

It has been two weeks since Russia chose it's next Junior Eurovision entrants. Tayana Mezhentseva, and Denberel Oorzhak were crowned the winners with the song, "A Time For Us". Since then, the national broadcaster has been very busy filming the official video accompanying the song. Today, the official video for, "A Time For Us" has been released for Russia at the contest. This entry has been joined by several other nations, that has also seen Ukraine release their official

Thirteen years after the last participation of Spain in Junior Eurovision, Melani García will represent the country this November in Gliwice, Poland. The young singer will do this with the song 'Marte', which has already been released by the Spanish public broadcaster (RTVE). The song has been defined as an anthem in defence of the oceans. 'Marte' ('Mars') is a powerful and epic pop song with lyrical airs. Melani has participated in the composition of the melody with the com

It's official, the national broadcaster for Serbia, RTS, in the last few hours have released their entry for this year's Junior Eurovision Song Contest to be held in Gliwice, Poland. It was already known that Darija Vračević would be the entrant, but today the song has also been released. It is called "Podigni Glas" which translates into, "Raise Your Voice". The song itself was written by the young artist, alongside A. Milutinović, and L. Vukomanović. It can be viewed belo

Eurovision 2020 | Cyprus has three artists in the running for Rotterdam

There are three singers in the running to represent Cyprus at the Eurovision Song Contest in Rotterdam next May, according to Eurovision Fun. Reportedly the shortlist includes two male singers and one female singer, with Cypriot and Greek media currently speculating that the Cypriot broadcaster CyBC's preferred artist is one of the two males. Reports say that the two male artists are Ian Stratis and Vangelis Kakuriotis. CyBC have internally selected their Eurovision Song Cont 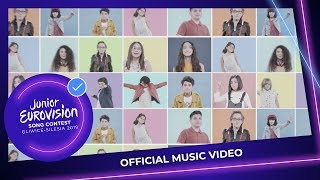 The Georgian representative for Junior Eurovision 2019, Giorgi Rostiashvili, has released his song "We Need A Love" for the contest, alongside an accompanying music video, which you can see below. The song is fresh and funky, with some jazzy elements to it. Giorgi won the right to represent Georgia at Junior Eurovision 2019 in Gliwice after winning Georgia's national final, Ranina back in May. He beat off two other participants to be crowned the winner, gaining top marks from
123
4
5